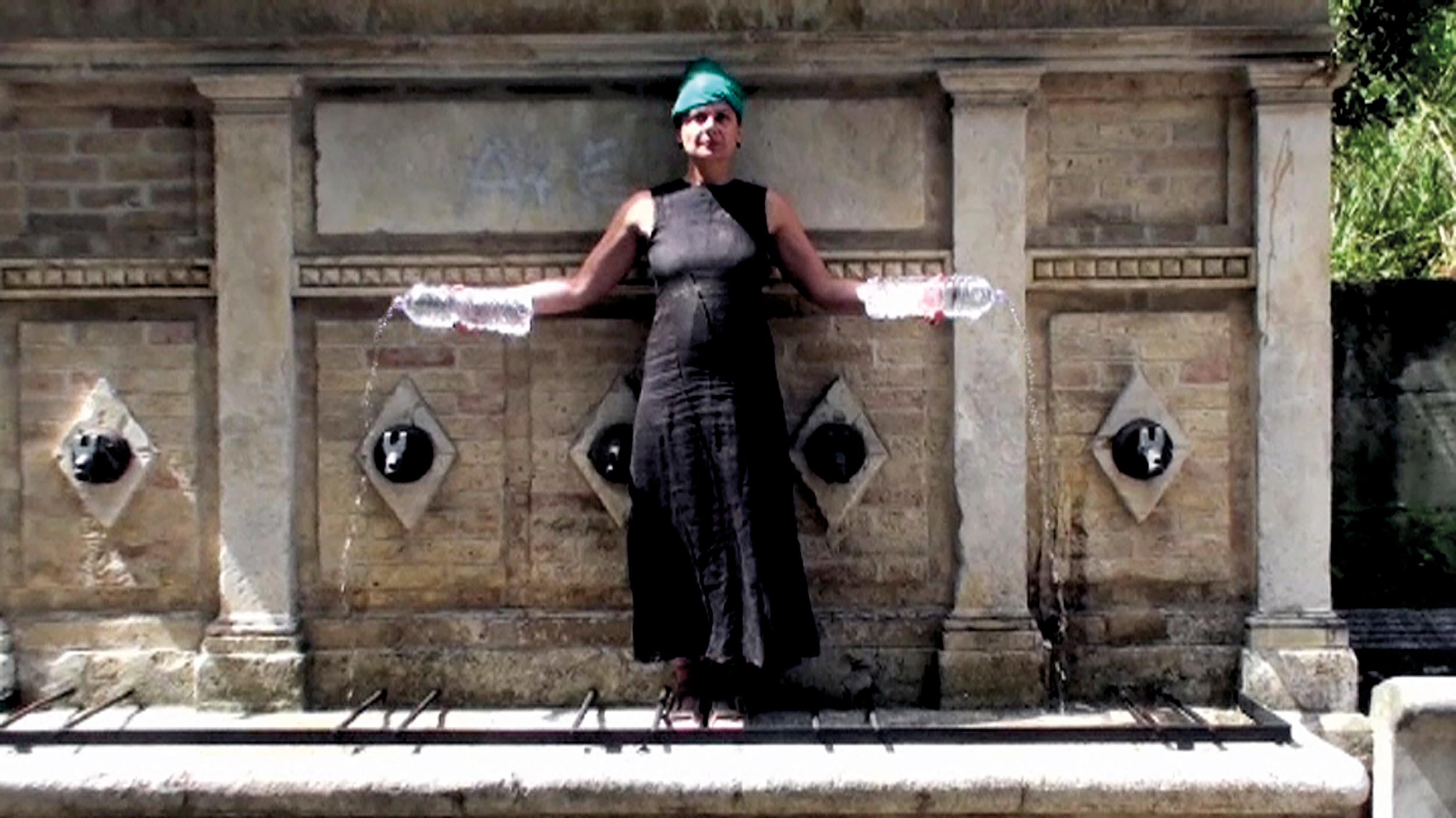 “Something important is happening here”

Ever since her arrival in Lahore almost three years ago, Italian art historian and curator, Lavinia Filippi, has been in close contact with contemporary artists of Pakistan. She has written on art practices and exhibitions in various international and Pakistani publications, including Flash Art and ArtNow Pakistan. She has also curated exhibitions that highlighted different aspects of Pakistani art — the most recent being I.D., held at the Islamabad Literary Festival 2014 — and conducted a workshop on Art Povera in the Department of Fine Arts at the National College of Arts in Lahore.

Filippi was associated with the Castello di Rivoli, Museum of Contemporary Art in Turin, Italy.
She is currently co-curating a section on Pakistani art for an exhibition in Italy next month.

The News on Sunday (TNS): Please share your early experiences and exposures to the world of art.

Lavinia Filippi (LF): Art has always been a part of my life. My father’s side of the family has always been interested in archaeology, painting, writing and collecting, but with a rather conservative approach to culture. I am the first one in the family involved with contemporary art — and for this my family is suspicious!
When I started studying art history in Rome, after my BA in Social Sciences at the Ottawa University in Canada, I thought I would write my thesis on the 15th or 16th century art. But during my studies, I discovered that contemporary art was much more alive and exciting. I found the possibility of developing an opinion on an artist and his artwork and be able to discuss it with him/her, while understanding the social, political and economic context it was created in, fascinating.
While at the university, I started writing for the university magazine that I had helped create and soon for many other publications.
I decided to spend some time in New York after my degree to get a better view of the international art scene. I worked in a studio and wrote as a correspondent for some Italian newspapers and specialised magazines.
I received a proposal to open and direct the Roman seat of an international art gallery after a year. So, I moved back to Italy.

TNS: How was the experience of working for the Italian Museum Castello di Rivoli?

LF: After three years at the gallery, I received a job offer as a consultant, anchorperson and correspondent for a TV art show on the Italian National Television (RAI). The director of the TV channel was nominated chairman of the board of directors of the Museum of Contemporary Art, Castello di Rivoli, four years after I had joined the channel. He asked me to be on his team.
Castello di Rivoli is the first Italian museum ever dedicated to contemporary art. Founded 30 years ago in an historical royal residence, the museum faced many difficulties. Despite its permanent collection and temporary shows, it had a limited number of visitors. We decided to innovate to attract more people and spread its content widely, hence castellodirivoli.tv, the first web-TV of a contemporary art museum in Italy was set up.

TNS: How do you perceive the different movements in Italian art, such as Futurism, Arte Povera and Transavanguardia? Do these have links with classical Italian art? Do artists own this tradition or discard it or re-interpret it?

LF: Italian contemporary art is strongly related to the traditional and classical art, from the time Italy didn’t even exist as a modern nation. All three movements you mention above are different from each other yet you can trace a strong connection with the past.
Futurists were actually reacting to the past and wanted to abolish traditions and everything established before them. Arte Povera was a revolutionary movement deep-rooted in the territory, and art installations of the artists were often classical in aesthetic. Transavanguardia was about going back to traditions in means and content.
Hence, no contemporary artist in Italy seems unresponsive or indifferent to history.

TNS: Which brings us to Pakistan. How would you comment on the revival of miniature here?

LF: It’s an interesting phenomenon. For populations with long and rich history, such as Italians and Pakistanis, past is a source of inspiration and, at the same time, limitation — in the sense that one cannot ignore it when defining oneself and finding unity. The past will always re-emerge.
It’s not surprising that neo-miniature started in Lahore, the cultural capital of the country.
I think neo-miniature is a way to pay homage to an ancient form of art and communication from the pre-British times, and a way to debunk it.
In fact, miniature is a sophisticated technique that requires discipline and resolution. Some of the artists have reached a level of dexterity and freedom that allows them to master the media, setting the miniature free from its historical cage.
Today, miniature painting has been taken out of wasli paper, frame and exhibition spaces. It has been mixed with innovative media, like video projection in Shahzia Sikander’s work or transformed in installations in Imran Qureshi or Aisha Khalid’s pieces.

TNS: Do you think miniature has different meaning for an outsider than a local?

TNS: Is there a parallel of this phenomenon in any other society, where a genre, lost to past, is picked and promoted to become the most potent symbol of art?

LF: Not that I know of. There was some revival of traditional techniques in Italy, but they were short lived and never became as relevant as neo-miniature in Pakistan.
I am thinking about a movement from the 1880s, Anacronismo, where artists reacted to the extreme conceptualisation of art by going back to classical aesthetic in form and humanistic themes in content. Or even Trasnsavanguardia, where an artist, such as Enzo Cucchi, creates sculptures using traditional techniques to knead bronze or marble. Luigi Ontani, another established Italian artist, often uses ceramics to express provocative messages. But in all these cases, the artist designs the work and then turns to artisans for concrete realisation.

TNS: Apart from neo-miniature, do you see any other movement in Pakistan?

LF: Well, I see three developments in Pakistani contemporary art: neo-miniature not just a conceptual but a technical movement; ‘Karachi pop’, with works inspired by local film industry, truck art, or any other image and content that is part of today’s everyday life, including weapons, camouflage patterns, calligraphy, embroidery; and the ‘third way’, a minimal, abstract, geometrical research that might have started with Zahoorul Akhlaq or even before, and that is now going towards an impoverishment of the existing system of symbols and definition of a ‘new alphabet’. This is evident in works of Mohammed Ali Talpur and Imran Channa and some established artists, like Rashid Rana and Imran Qureshi.

TNS: How do you view our contemporary artists and their presence at home and away?

LF: Pakistani art is elegant in form and solid in content. It blends aesthetic values with powerful messages. I admire the sense of community that unites them, the fact that almost all of the more established ones are teaching art with dedication, despite their busy schedule of international shows. I’m impressed with their willingness, competence and humbleness.

TNS: Why do you think our artists are so focused on politics?

LF: It’s normal. It makes perfect sense. The political situation is predominant in Pakistan. The country is still struggling with its contemporary identity. Being a huge country, in terms of people and realities, and having come about only 67 years ago, the current quest for a comprehensive Pakistani identity may require some time to level off.
At the same time, I wouldn’t limit Pakistani contemporary art to that alone. Artists such as Naiza Khan, Risham Syed, Farida Batool and many others are able to balance these topics with more universal and timeless matters.

TNS: Do you see any common elements in the contemporary art of Italy and Pakistan, between East and West?

LF: Yes I do. The two countries have a long and rich history, but from a political perspective, both are relatively new nations — Italy since 1861 and Pakistan since 1947. It is not easy to transmit revolutionary ideas because both respect traditions.
Another common thing in the contemporary art scene of the two countries is love for beauty.
I am happy a divide between the East and West exists. Right or wrong, every country, every continent knows what works for it and this makes art, travel and life more interesting. That said, some universal values go beyond borders and across centuries, and some artists play an important role in underscoring them.

TNS: Recently, you conducted a workshop on Arte Povera at NCA? How would you describe your experience of working with students?

LF: It has been a positive experience. I asked students to reflect on some concepts and then create an art piece, using materials from everyday life, as did artists of Arte Povera in the 1960s-70s’ Italy. I knew it was challenging because, if on one side the indications allowed freedom, on the other, the limits were firm.
All students involved in the workshop surprised me with some accurate ideas and achievements.

TNS: You are co-curating an exhibition of Pakistani and Italian art in Italy in July 2014. What’s the show about, criterion for the selection of artists and more importantly your experience of working with Pakistani artists?

LF: The project, Stills of Peace and Everyday Life, is a dialogue on peace and cultures of Italy and Pakistan. I have selected videos and photographic works by Sajjad Ahmed, Farida Batool, Shalalae Jamil, Lali Khalid, Naiza Khan, Nadia Khawaja, Aroosa Naz and Risham Syed. I realised only recently that out of eight artists, seven are females!
I think the body of work will give an idea of the level and diversity of the Pakistani contemporary art scene. The other curator in Italy selected works by Italian artists working in the region where the show will take place, and together we underlined similar concerns.
I am looking forward to the show. The selected works are powerful. The exhibition space, the crypt of Atri’s cathedral, is a unique location.

TNS: What do you find most exciting about the contemporary art of Pakistan?

LF: I am most excited to be here, that something important is happening and I am lucky to witness it. I am moving to London in a few months but will keep in touch with Pakistani artists.